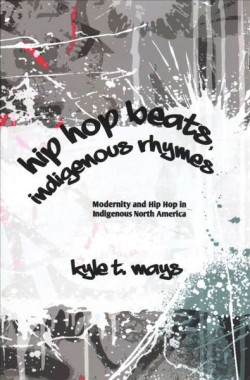 Argues that Indigenous hip hop is the latest and newest assertion of Indigenous sovereignty throughout Indigenous North America.

Expressive culture has always been an important part of the social, political, and economic lives of Indigenous people. More recently, Indigenous people have blended expressive cultures with hip hop culture, creating new sounds, aesthetics, movements, and ways of being Indigenous. This book documents recent developments among the Indigenous hip hop generation. Meeting at the nexus of hip hop studies, Indigenous studies, and critical ethnic studies, Hip Hop Beats, Indigenous Rhymes argues that Indigenous people use hip hop culture to assert their sovereignty and challenge settler colonialism. From rapping about land and water rights from Flint to Standing Rock, to remixing “traditional” beading with hip hop aesthetics, Indigenous people are using hip hop to challenge their ongoing dispossession, disrupt racist stereotypes and images of Indigenous people, contest white supremacy and heteropatriarchy, and reconstruct ideas of a progressive masculinity. In addition, this book carefully traces the idea of authenticity; that is, the common notion that, by engaging in a Black culture, Indigenous people are losing their “traditions.” Indigenous hip hop artists navigate the muddy waters of the “politics of authenticity” by creating art that is not bound by narrow conceptions of what it means to be Indigenous; instead, they flip the notion of “tradition” and create alternative visions of what being Indigenous means today, and what that might look like going forward.

“This book is incredibly important and will change the fields of Native American, African American, gender, and sound studies. It is the first full-length monograph on the rich, diverse, and complex field of Indigenous hip hop. This is the text against which all other studies in the field will be compared.” — Michelle Raheja, University of California, Riverside